We're going to start with the familiar part, since I assume most of my readers are from North America. Stop 1 on the teleporter is Millbrae, California. On the west side of the tracks it should look pretty familiar, since it's what most of California looks like, once you clear the picturesque Victorian core of the Bay Area - basically, it's endless tract homes built after World War II.

The east side of the tracks is all 1-2 story industrial buildings and strip malls, with enormous, overbuilt roads.

Ballparking it, there's maybe 10 homes per acre here on average. So, back of the envelope, let's say that there's 1600 homes within a 10-minute walk of the train station.

Now, check out the area near the Alcalá de Henares station in Madrid, 40 minutes from Madrid's main railway station. On the north side it's a mix of rowhouses and modern 4-6 story apartment buildings.

The south side is older, and is all 6-story apartment blocks from the 1970s. This is the kind of environment you see on traditional small town American Main Streets, but which is largely banned today.

(Side note: Yes, the US used to build like this.  The below example is from Augusta, Maine, population 19,136.)

This type of development gets you about 90 homes per acre - enough to put 14,400 homes within a 10-minute walk of the train station. This kind of traditional development is comfortable without being full of Manhattanesque towers - but it still puts nine times as many people onto the same piece of land as in the US.

Reason No. 2: Europe gets more transit for their money.

When the US builds transit, Americans get way less for their money than their European counterparts. Some of this is because US transit authorities are bad at project management, and because the U.S. system of local government is so complex and Balkanized. But it's also because Americans blow all their cash on a few enormous stations, instead of a bunch of cheap cookie-cutter ones.

This is a problem, because most stations aren't Grand Central and shouldn't try to be. A train or bus station should be a sensible, utilitarian place that needs tracks, a platform, a ticket machine, and somewhere to wait if it's too cold, too hot, or too rainy.

Americans don't do that.

See the station? It's huge. The thing is four stories tall, with a full-length concrete and steel concourse that's three stories the air and a beautifully engineered, cable-supported roof. There's 11 acres of surface parking, and a five-story parking garage.

For comparison, let's look at Alcala de Henares's train station. It's a much simpler thing. There's a spartan one-story waiting room with a ticket kiosk; a simple bridge to cross over the tracks, and roofs over the platforms to protect passengers from the sun and rain.

There's two slivers of parking near the station, two acres in total, and no garage.

Millbrae's station is prettier, and if you're a politician it means you can show up with comically oversized scissors and cut a ribbon. But Alcala is way more useful for commuters. To get the train at Millbrae, you have drive there, cruise around the garage to find a parking spot, walk across 100 yards of parking lot, go up three flights of stairs, pay the fare, walk across the concourse, walk down three flights of stairs, and finally get to the platform. To get to the Alcala platform, you cross the street, pay the fare, walk through 50 feet of building and you're on the platform.

Alcala-style stations are also better because you get more of them. Money is limited, and every dollar poured into a colossal station like Millbrae doesn't get spent on ordinary stations elsewhere. For the price of one Millbrae, you can build a half-dozen cookie-cutter stations like Alcala.

It wasn't always like this in the U.S. Back in the day, American transit engineers were painfully aware of how much these kinds of luxuries cost - and most importantly, the people holding the purse strings demanded accountability for their money. When Philadelphia designed the Broad Street Subway in 1913, the designers even provided estimates of how much extra it would cost to build the subway with different ceiling heights.

But today, that's not the case. American politicians want to have shiny new stations, and transit agencies don't have enough political pull or institutional knowledge to make sure that the money is spent well. Because of this, the San Francisco Central Subway costs ~$930 million a mile to dig. This is triple what it costs to build a subway line in Spain. And no, it's not because of earthquakes - San Francisco still pays twice as much per mile as Tokyo.

Reason No. 3: Europeans didn't tear down their city centers to build freeways.

Now, let's zoom out a little, to the metropolitan core, because there's one more big difference. After the Second World War, Americans, with their cities untouched by war, voted to give their cities over to the utopian modernists of the day, and to tear down their cities to accommodate the automobile. Europeans didn't, even though their cities had been cut to ribbons by aerial bombardment and street fighting.

Let's start with the Bay Area. Because of the Bay Area's unusual history, Oakland is the best place in the Bay Area to see how this process panned out. (San Francisco demolished half of its downtown freeways because of the 1989 Loma Prieta earthquake, so it's not a good illustration anymore.) Oakland's center is bracketed on three sides by freeways and by a lake on the fourth - so there's a little less than two square miles to build out.

Let's hop back in my teleporter and go to Madrid. Modern Madrid came of age during the Spanish economic boom of the 1960s and 1970s, contemporaneous with the freeway era of the United States.  But Madrid didn't do what the Americans did. In Madrid, the government built freeways around the city center, not through it. This makes all the difference, because nobody wants to live next to a freeway. Freeways are noisy, polluted eyesores. Since American metropolitan centers put freeways through the city center, they simultaneously made the city a less desirable place to live, less convenient by transit, and way easier from people the sprawling suburbs to drive in.

Solution No. 1: US cities need to allow people to build jobs and housing near transit like in Europe. This requires zoning reform, as I've written extensively in this space. Due to Millbrae's zoning law, Millbrae is legally required to be postwar suburbia.

Solution No. 2: Boring bureaucratic reforms to make sure the public's money is spent well. This isn't a problem that can or should be solved by innovation, mind you. It's a problem that can be solved by emulation. It means sending people to Spain, learning the bureaucratic nuts and bolts of how their transit gets built, and hiring Spanish experts to show Americans how to get things done. Have humility, and learn from the best.

Solution No. 3: Tear down all the urban freeways and replace them with boulevards and mass transit. Yes, I'm serious. Most downtown freeways were built between 1950 and 1970, and are in need of complete reconstruction or demolition anyway. No, it doesn't lead to apocalyptic traffic when you tear down urban freeways. San Francisco already showed that this is the case. After an earthquake in 1989, San Francisco tore down the old Embarcadero Freeway which ran right through downtown San Francisco. 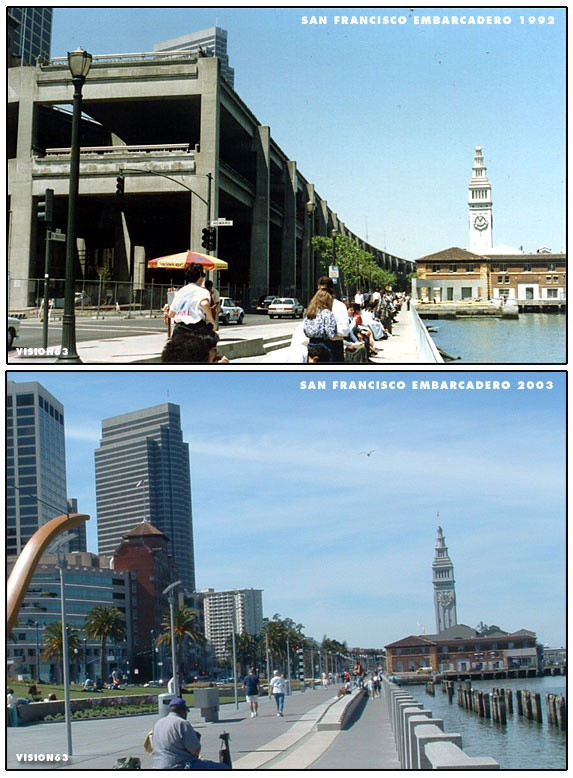 SF replaced the Embarcadero Freeway it with a grand boulevard with light rail tracks in the median, and today no one would have it any other way.

Europeans have better mass transit than Americans because they designed their cities that way. We can do it here too, but it requires better land use laws, and better control of the purse strings.